Also known as Testolone, Rad140 is what is known as a research compound. While it is currently being studied as a potential treatment for various cancers, it has developed a popular following for other reasons. In particular, RAD 140 is being utilized by bodybuilders with increasing frequency. This is something to certainly consider. At the same time, there are a number of different components to this compound that should be kept in mind.

Testolone is also being studied for its use of muscle-wasting disorders. This is perhaps where its potential use for bodybuilders has sprung up. Before we cover anything else concerning this compound, keep in mind that RAD 140 has not been approved for use with humans. This is particularly important when we keep in mind potential Testolone side effects.

Rad140 is a type of investigational selective androgen receptor modulator. These compounds are also known as SARMs. It is currently under development by a company known as Radius Health Inc. As far as potential health products are concerned, Testolone is a relative newcomer to the scene. This is why it has not yet been approved for use by human beings. It has shown a good deal of promise, as a means of treating such conditions as breast cancer and muscle wastage.

Testolone was discovered and published in 2010. Because of this relatively small window of time, the studies are somewhat limited. Nonetheless, over that somewhat short period of time, Testolone has proven itself to provide better results to bodybuilders than steroids. Furthermore, it has indicated an ability to do this without causing side effects on par with steroids. It has already established itself as one of the most powerful and compelling SARMs to date.

The first clinical trials for Rad140 for humans began in 2017. The results have been deeply impressive thus far. Yet there are still several elements to the potential of Testolone that must be considered and taken seriously. 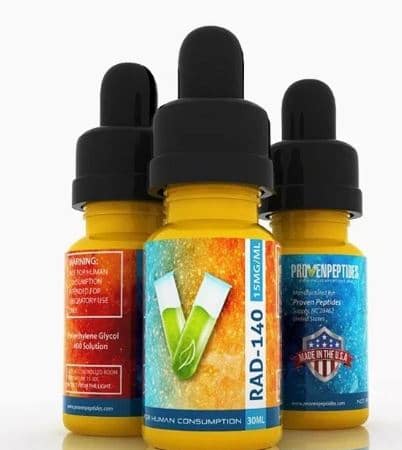 As mentioned above, RAD140 is largely being explored as a treatment option for breast cancer, muscle wastage, and similar conditions. In terms of dealing with muscle wastage, RAD140 works by increasing the muscle mass of the individual. It is for this reason that Testolone has become particularly popular with bodybuilding and similar interests. Again, this is not the type of muscle wastage that was considered, when Testolone was first discovered and published.

Diseases such as AIDs, MS, and cancer can cause a wide range of health problems. Muscle loss is one of the biggest ongoing health issues an individual will have to face if they happen to have one of the conditions mentioned. In terms of restoring that muscle mass, this substance has proven itself to be a powerhouse in clinical trials. Furthermore, it has shown fewer side effects than most SARMs (which we will cover in greater detail later). Testolone has even shown low toxicity in mice, which can be very encouraging from the standpoint of using Testolone to help humans.

One more thing about Rad-140: It allows an individual to gain weight healthily, without experiencing growth of the prostate.

We just mentioned that Rad140 has shown impressive weight gains, without causing the prostate to become enlarged, as well. This is a major benefit that also helps to further explain the rising popularity of the compound. There are several other benefits to consider, as well.

The ability to increase lean tissue, but in a way that doesn’t also increase fat, is one of the benefits that seem to be getting the most attention from consumers. There are also indications that RAD140 can also be used to enhance the speed, endurance, and stamina of the individual. This is perhaps yet another reason as to why Testolone has become so popular with bodybuilders. Studies are also indicating quite strongly that Testolone can also provide the user with a more profound anabolic effect than what one may experience through the use of testosterone.

In fact, not only have studies shown that it can have a better anabolic effect than testosterone, but there are indications that Testolone can also reduce the side effects that can occur by taking testosterone. Studies are also giving us the impression that the product also causes less in the way of liver damage when compared to anabolic steroids.

When it comes to Rad-140 side effects, there are a few things you will want to keep in mind.

The truth of the matter is that we don’t really know a lot about Testolone side effects at this point in time. With most SARMs, you do not have any of the side effects that are commonly associated with most available steroidal compounds. As far as current studies indicate, taking RAD140 will not cause your prostate to enlarge. Nor will you experience the testicular shrinkage that is often associated with the use of anabolic steroids and the like.

Having said all of that, we must still understand that we are talking about something that is in the very earliest stages of its existence. Although RAD140 was first introduced to the public over eight years ago, this is not a major period of time in the lifeline of a compound such as this. At this moment in time, we still really do not fully understand the long-term side effects of Testolone. For anyone considering RAD140 as a bodybuilding supplement, potential long-term side effects of it should be kept in mind.

In terms of potency and effectiveness, it has been compared on favorable terms to LGD-4033. The studies that have been conducted thus far have given us a suggested Testolone dosage of 20 to 30mg each day. Those who currently take RAD140 for bodybuilding purposes generally take a dosage every twenty-four to thirty-six hours. Women should consider lowering their own dosage to approximately 5 to 10mg over the same period of time. For best results, you can stack Testolone with ostarine and A Complete Guide to Ligandrol ( LGD-4033) 2018lgd-4033.

This is another aspect of RAD140 that should be kept in mind, with regards to future developments. As we work to find out the potential long-term consequences of taking RAD140, there is certainly a chance that the current dosage suggestions will change, as well.

What Can I Expect By Taking Rad140

Once more, it must be stressed that the results of taking the product for any reason are still being studied for things like long-term impacts. Having said that, you should begin to notice results in as little as four weeks. Many individuals who take Testolone have reported not only increased muscle mass but more energy and stamina.RAD140 is producing results at a rate that has never really been seen before. These fast results are further enhanced by the fact that there does not seem to be any short-term consequences of taking it.

You should also begin to notice increases to not only your muscle mass but to your overall bone density, too.

How Much Does it Cost?

At this moment in time, Rad140 can be purchased legally and simply enough. You can also purchase RAD140 online, but only in the interest of research purposes. Remember that the SARMs industry is an unregulated one. This means that while you can find safe, effective products from reputable companies, you still want to do careful research. This is the best way to ensure that you get the results you desire, while not experiencing any unexpected side effects that occur from a product that contains more than it should.

Many SARMs are incorrectly labeled on their packaging. This means that you may or may not be getting the correct ingredients or even the right amounts of each ingredient.

For the four week cycle, you will need roughly three to four bottles at sixty capsules per bottle. Prices vary, but you can expect to pay anywhere from $40 to $70.

Between the research and anecdotal reviews, it is reasonable enough to be very optimistic about it. More and more people are turning to RAD140 to assist with their bodybuilding goals. While you will want to continue to pay careful attention to the ongoing research for Testolone, there is nothing currently to suggest that Testolone is not at least worth trying for yourself.

Results can be found in just four weeks. However, many experienced users indicate that twelve weeks is the optimal amount of time for the best possible results. Some have even gone so far as to suggest a six-week cycle to achieve noticeable gains. Your best bet will probably be to start with four weeks and see how you feel. If you continue to feel fine or even improved, then you can opt for a six or twelve-week cycle. At the same time, if you experience any pain or discomfort from taking Testolone, you will want to discontinue use immediately.

To be sure, RAD140 has the potential to be one of the most significant bodybuilding game-changers to come along in quite some time.